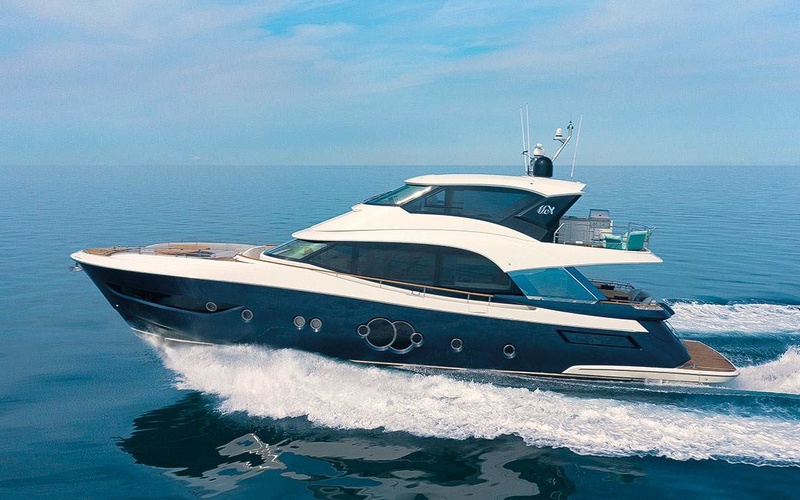 It’s funny how a smell or a taste can transport you. Certain boats have that effect on me too. I spot a Viking and am immediately back in New Gretna, New Jersey. I see a Sabre or Back Cove and can smell the pines surrounding the yard in Raymond, Maine. When I think of Monte Carlo Yachts, I think of South Florida boat shows; that’s where I learned about this brand and first boarded its boats.

The lines of an MCY, the shape of their hull windows and their superyacht level of finish makes me think that these boats would be most at home in the Med. More and more, the burgeoning Italian builder has been shifting its sights from Europe and Asia to the States. This is especially true now that it’s launched a new line of enclosed bridge motoryachts. Through MCY, I was introduced to the owner of hull number one of the 76 Skylounge, a successful businessman named Raf Aviner. I connected with Aviner over Zoom one evening when he was working late in his office. I expected to find the yachtsman holed up in Miami or Palm Beach. The view behind him looked vaguely familiar, and decidedly non-Floridian. I’d learn that he was just down the road from me in Connecticut and that he does most of his summer cruising not off the Amalfi Coast, but on Long Island Sound. In the winter months he uses his boat as a “home away from home” in Florida. Despite the fact that this two-time MCY owner has named his boats Knot @ Work, he admits that he can often be found with a laptop nearby.

“The initial idea was to use it to get away from work, except the irony is I love working from the boat; it’s my happy place,” says Aviner. In fact, his desire to work from the boat played a significant role in the building of his 76 Skylounge. “On my two previous boats it was always a compromise; I was either in the cabin with a laptop on my lap or in the salon. I never had a real space for myself. We wanted more interior space in the salon, and not having a helm station really opens things up. These guys at MCY are magicians; they doubled the space on the flybridge in the new 76. Enclosing that space made for a very large second salon that doubles as a nice office for me so I can work quietly from the boat. I should really call the boat @ Work.”

A former sailor, Aviner’s appetite for powerboating was ravenous. He says he dipped his toe into the sport with a 50-foot Prestige. “For 18 months I ran that boat all the time. Then I saw an MCY advertisement in a magazine for the 65—and remember MCY was new back then. I saw the brochure and I fell in love with it. My wife and I went to see it and met the MCY team. I was convinced we were going to get the 65, but everyone else in my family said we should go for the 76. In a matter of two to three years we jumped from no boat at all to a 50 and then a 76.”

Ever the prudent businessman, Aviner shopped around and looked into yachts from a number of different builders. While he was immediately taken with the MCY’s design aesthetic, he had some concerns. “I had some trepidation going into buying a boat from an Italian yard, and I’m European. I’ve been to Italy hundreds of times, but you’re handing over a check and hoping they build you a nice boat. There’s a language barrier. I was nervous, but I have to say, it was really fun.”

When most people talk about MCY, the emphasis is usually on the Italian design and the luxury appointments. It was nice to hear him talk about the boat’s performance underway. “I love the hull,” he says emphatically. “The boat runs amazingly well. It runs really well in head seas; it’s really comfortable. After seven years, our boat didn’t creak or feel tired at all.”

But alas, he did find himself dreaming of a new boat. As much as he enjoyed his experience with MCY, he wondered what it might be like to cruise on a different brand. His eyes wandered to Plymouth, England, and Princess Yachts, among others. He found a number of boats he liked, but none that allowed for the kind of collaborative customization he enjoyed on his first 76.

When MCY debuted its Sklyounge line a couple years ago, Aviner was ready to commit to his next model; he began working with MCY on hull one of the 76 Sklyounge.

“I wish MCY was more well known here. I hope the Skylounge line really helps them,” says Aviner. “The U.S. is really different. On our first boat when we asked for cup holders, they looked at us like we had three heads. Over the years they’ve really come around to this market.”

Despite continuous curve balls caused by Covid, Aviner says he enjoyed the build process of his second MCY even more than his first. That’s saying a lot considering his yard visits and sea trials were completed over Zoom.

“The quality of their work was good, but now it’s outstanding,” says Aviner.

After a winter spent cruising the west coast of Florida, he’ll be bringing the boat back to Connecticut for a summer of New England cruising. “This boat will be massively used,” says Aviner. Before hanging up, we talked about a sea trial when the boat returns to our shared home waters. You don’t see too many MCYs up this way, but after speaking with Aviner, I have a feeling that in time, this brand will be as at home here as it is anywhere else in the world.