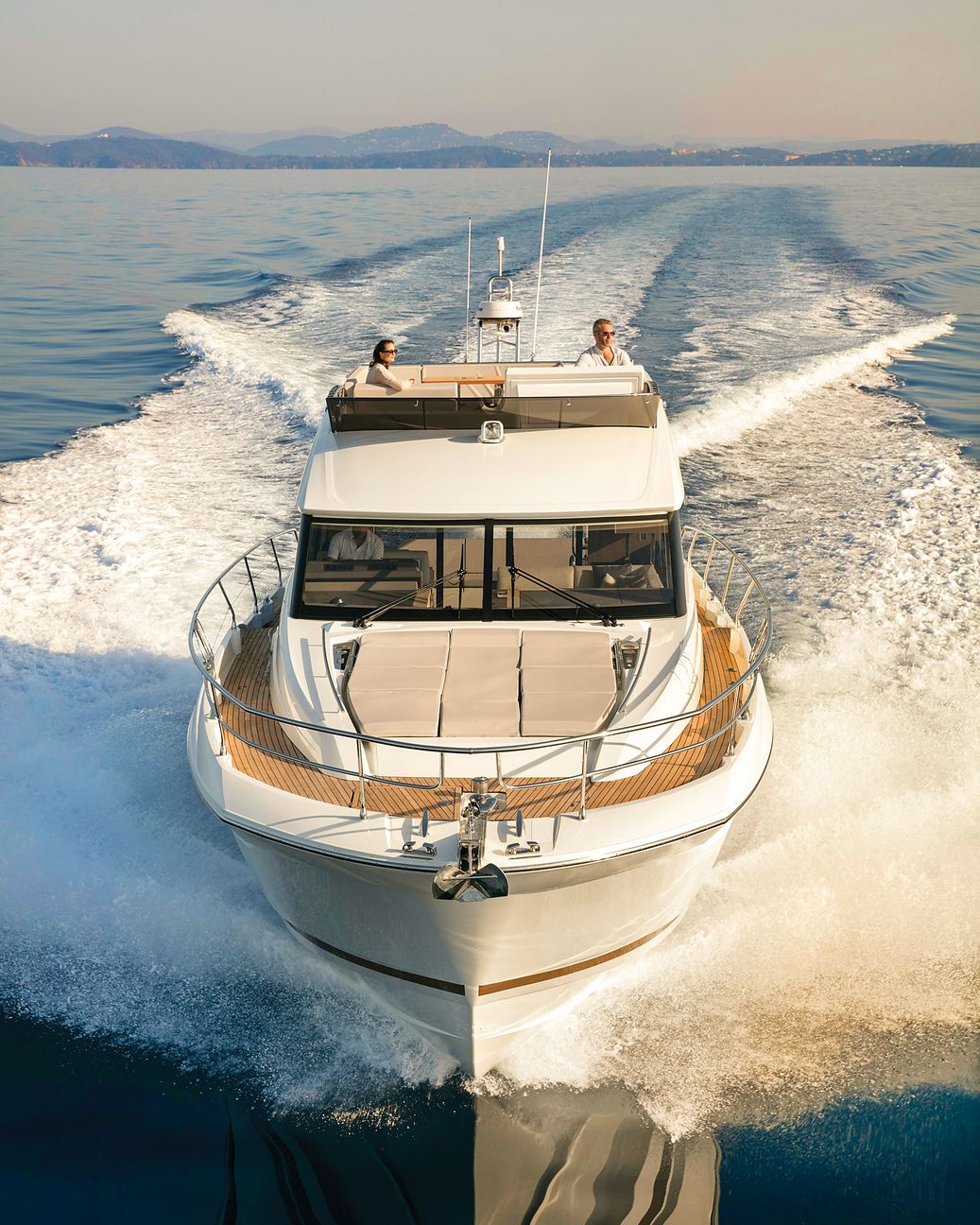 The Prestige 520 has big shoes to fill. She’s the model expected to replace the Prestige 500/500 S, a market leader for seven years with more than 450 hulls delivered. Most builders in Prestige’s situation would do little more than a face-lift. A tweak here and a tweak there. Why mess with success? To my surprise, the French builder did a whole lot more than tweak. To create the 520’s profile, Garroni Design (which also penned the interior) used 50 percent more glazing than Prestige had on the 500. The side windows extend nearly down to deck level at one point, 3 feet 7 inches from top to bottom on the inside, and there are hullside windows and a transom window. On the outside, all of that side glass is flush, so from a little ways off, each side looks like it’s built with one big pane. Another outside evolution is the foredeck, which is double the size of the 500’s thanks to the snubbing of the 520’s bow. The space allows for a sun pad that measures 6 feet at the head, 5 feet 3 inches at the bottom, and well more than 7 feet long, with a pull-up sunshade.

Inside, the 520’s volume is said to be 7 percent bigger than her predecessor’s. Now, 7 percent may not sound like a lot, but it allows for headroom where it’s needed: 6 feet 5 inches at the after end of the salon by the galley, and 6 feet 9 inches over the raised midsection. With all the surrounding glass, the space feels large and the views are great.

And this may be a first, my writing a compliment about a sofa that is part of a dinette setup, but the seat cushion measures 26 inches from back to front. I’ve been banging on about silly seats for years. None of us sit for fun with straight backs, and knees and ankles together, the way smaller cushions assume that we will. I sprawl. You sprawl. We all sprawl. This sofa’s design allows for comfort.

A glass sliding side-deck door is to starboard abaft the lower helm. It’s 21 inches wide and 41 inches tall — granted, not everyone’s idea of a proper door — but diminutive skippers will likely use it all the time, and those who are “bigger boned” will have fresh air amidships. I’m in the latter camp, and at one point I was looking aft from the helm seat with the back cushion reversed and had my feet outside because I could. Incidentally, the helm seat goes back and forth and up and down electrically, as does the dinette table.

As for accommodations, the 520 has the same three-stateroom, two-head layout as the 500: a double-berth stateroom forward that shares a head with the portside stateroom, whose twin berths convert to a double, and an owner’s en suite stateroom with its own staircase aft.

My sea trial off Cannes, France, took place on a warm spring day with slight to moderate seas. The 520 consistently topped out at just over 27 knots, but we were lightly loaded with five people, 60 percent fuel and all other tanks empty.

On average, the builder says, extras add 25 percent to the 520’s base price of $970,000. At $96,290, the Seakeeper NG6 is the biggest-ticket option — and Prestige says that 80 percent of owners go for it. Beyond trim and electronics packages, other major options include the “tropical” air-conditioning upgrade, a hardtop, and champagne metallic paint that adds four weeks to the delivery time. There’s also a high-low platform that complements the garage module, which will accommodate a Williams Minijet 280 or Turbojet 285.

The Prestige 520 builds on the 500/500 S’s DNA with a bit of genetic engineering, if you will. The result is a yacht with a family resemblance and a personality all her own.